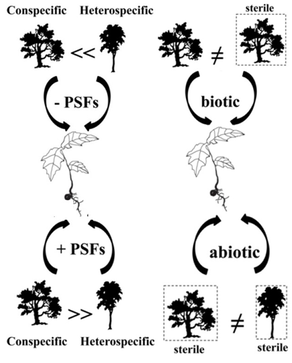 Seedling survival
The goal of my research lab is to elucidate the mechanisms that drive the dynamics of forest communities. We are interested in feedbacks between plants and their soil microbial community and the impact that these feedbacks can have on maintenance of species diversity, migrant colonization potential in response to global climate change and invasion by non-native tree species. We also investigate how abiotic factors (e.g., light and soil resources), tree species functional traits and the interaction between abiotic factors and functional traits can affect the occurrence or strength of these feedbacks. Since forest communities are highly dependent on recruitment dynamics, I have directed my research at the early demographic stages (i.e., seed germination, establishment and survival during the first years). I couple greenhouse studies that allow for rigorous manipulation of growing conditions to ascertain causality with field experiments, which account for the complexity of natural processes.
​
Examples of some of the broader questions that my lab group addresses include:
PLANT-SOIL FEEDBACK MAINTAINING TREE SPECIES DIVERSITY
The mechanisms maintaining high species diversity is a central question in community ecology. Two of the most influential mechanisms proposed for tree species coexistence have been negative distance- and density- dependent mortality (NDD), and resource-based niche partitioning. In our lab we investigate whether these two mechanisms are interconnected via PSF.
​CLIMATE CHANGE
In this research project, we look at the direct effects of current and predicted levels of rainfall and temperature on tree seedling survival, growth and functional traits and indirect climate effects through changes in PSF.
Regeneration and survival of forested wetlands are affected by environmental variables related to the hydrologic regime. Climate change, specifically alterations to precipitation patterns, may have outsized effects on these forests. In this study, we investigate factors suppressing tree regeneration since the 1970's in a seasonally flooded karst depression.